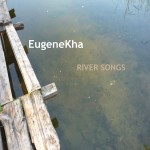 This week’s review is about a great piece of Ambient “World” music released at the magnificent Clinical Archives netlabel, a steady source of “eclectic and illogical music”. Its self-proclaimed aim is to broaden the definition of music.

EugeneKha’s River Songs are not attempt in this direction, but they are a dozen well-crafted ambient songs with a distinct sound with various ethnic and cultural influences. In the following are 3 previews of my favourite songs as well as the obligatory download link.

The River Song is the flagship song of this album. It starts big with a cinematic opening which could fit a broad range of films. Great first 30 seconds! Then the song slowly introduces other motives and instruments, until in 2:10 an oriental touch is added which moves the imaginary scenery.

The Volga Bulgarians strolls through a vivid medina quarter, mixed with traditional western instruments. The comparably strong beat has a quick pace for such an “Ambient” music release.

The Eternal River could be the River Song’s elder brother. A little less experimental, but well made and with a great primary motive (played in 1:55-2:25).