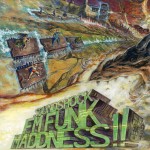 What happens if you let chiptune artists create Funk music? This compilation, I would say. Stuffed with citations from classic video games, this 18 track long release well states that chiptune music has evolved much since its initial days. Too broad is the span of music styles, so that the two presented tracks are only spotlights. If you like what you hear, listen on!

Ripple Boogie is an old NES soundtrack, jammed upon by a (synthetic) Funk band. Groovy patterns and electronic melodies fit surprisingly well together.

Shogun is an upbeat piece that sounds like crossover of soundtracks from F-Zero and Secret of Mana.