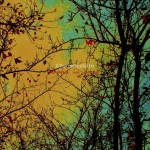 Chamberlain is alternative rock from Italy with a psychedelic or progressive influence. Guitar soli included. They do good old craft, no heavy effects in post-production.

The EP was released Lophora Williams that has published five releases so far, mainly alternative rock. There are reviews in my pipeline for this netlabel. But for now, listen to my two selections from this three track EP at hand.

Moon In June (alt. version) has a slow, nearly ambient intro, until the rock song unfolds after 2:00.