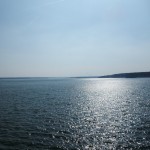 AQUA-CSP is one of three conceptual studies which explored different parts of the DESERTEC project, a concept which relies on solar power from the world’s desserts as a major energy source for Europe. In previous posts I already talked about the two other studies MED-CSP andTRANS-CSP, the first focused on generation, the second on transportation of the generated electricity. This article deals with the third, often overlooked, aspect if this undertaking: desalination of huge quantities of sea water.

It might not be apparent yet, but growing world population, incresing per-capita consumption of usable water plus global warming will most probably lead to a severe shortage of fresh water in the aride regions of the world. This so-called water crisis has many unsettling implications. So we better think about ways to alleviate or even prevent the crisis.

Desalination is an energy-intensive process to remove salt from sea water. Coupled with filtering it can supply fresh water. This is where the local benefit of having huge CSP (concentrating solar power) plants in desert regions. Continuous, carbon-neutral electricity plus a reliable water source are things I definitely would like to have in my country when facing a water crisis in the foreseeable future.

One thought on “DESERTEC studies: AQUA-CSP”