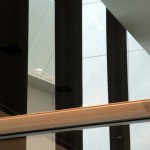 This article originates from a presentation given by Hani El Nokraschy, one of the leading persons of the DESERTEC foundation. He presented the foundation’s vision towards a sustainable generation of electrical energy and drinking water around the Mediterranean Sea for Europe, Africa and the Middle East. His presentation covered the three main studies called MED-CSP, TRANS-CSP and AQUA-CSP. CSP stands for Concentrating Solar Power and is the key technology for exploiting the huge potential of solar energy that shines on Africa’s deserts.

I split the presentation to three articles, each presenting one of the studies. So this article deals with the idea from which DESERTEC originated and the first study MED-CSP.

According to an interview with Jörn Aldag, one of DESERTEC’s founding fathers, the idea originate at the physician Gerhard Knies who worked at the research centre Desy in Hamburg. After the Chernobyl disaster in 1986 he realised that nuclear energy could not be a solution to mankind’s energy problems. His second thought was the simple fact that world’s deserts together receive energy equivalent to the annual global energy consumption — in 6 hours.

So even when just the technically and ecologically exploitable potential is used, it should be easy to cover our energy demand without having to burn fossil fuels. To estimate this potential and to show a possible strategy for its exploitation until 2050 in the Mediterranean area was the task of the study MED-CSP.

The study’s name is an abbreviation for Concentrating Solar Power for the Mediterranean Region. It investigated the potential for electricity supply from renewable sources in countries around and near the Mediterranean Sea. The region is described as EU-MENA which stands for Middle East and Northern Africa. This includes — amongst others — Spain, Italy in Europe; Algeria, Morocco and Egypt in Africa and Turkey, Iran and Saudi Arabia in Middle East. From this potential it then develops a scenario which demonstrates that it is possible not only to meet the energy demand of future growth in developing countries, but also export excess energy to central Europe for mutual benefit.

Before I get into the details, first some numbers from the EU for comparison: As of 2006, EU27 consumed about 3400 TWh of electric energy. About 55% of this energy is delivered by thermal power (mainly from coal, gas and oil), another 30% by nuclear power and 14% by renewable sources. The missing 1% comes from pumped storage power plants. (Source: Eurostat)

Now to the EU-MENA area: in 2002 the 25 countries had an energy production of 1400 TWh/a, almost completely provided by oil, gas and coal. This isn’t very surprising as states like Iran, Iraq, Saudi Arabia have huge reserves of them.

Image 1: Scenario for electric energy production in EU-MENA countries from 2000 to 2050 in TWh per year, separated by energy source. Diagram reproduced from the original numerical data.

The two remarkable points are obvious: First, the reign of fossil fuels ends. The role of coal and gas rises its peak probably somewhere between 2020 and 2030 and then their importance begins to diminish. Second: At the same time concentrated solar power plants begin to rise in importance. Their enormous potential becomes obvious when realising that they might generate 2000 TWh/a in 2050. That is more than 50% of today’s electrical consumption of EU27. While a lot of the produced energy will be used to power their own economies, a huge share will also be left in order to be exported to the “colder” parts of Europe where it can help replacing fossil fuels burnt there.

The following diagram gives an idea of the contributions to the proposed future energy production in the Mediterranean area. 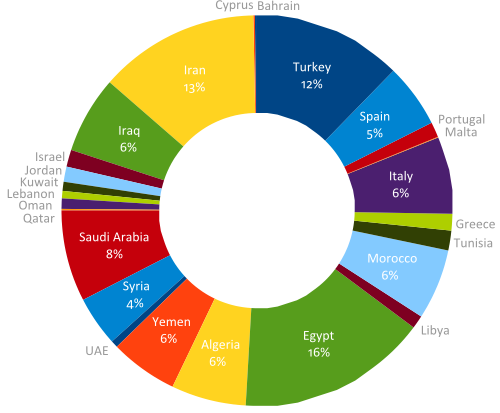 I have no striking interpretation for this image. Slice size largely depends on the population and expected state of development in 2050. It just gives an idea of the roles of single countries. Italy and Spain will have exploited nearly all their CSP potential while other countries would still have huge reserves left to grow their energy output.

The next article on this topic will be about TRANS-CSP dealing with the infrastructure needed for energy transports from MENA to Europe. It will also focus on the economics (read: price) of production and transport of electricity. The third article will present the study AQUA-CSP which investigated the potential for production of drinking water based on desalination powered by renewable energies.