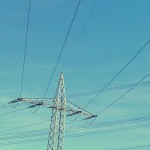 While the last post focused on the MED-CSP study which explores the technical potential for generating electricity, this article deals with the transmission of a part of this energy to Middle and Northern Europe where it can substitute fossil fuels.

The study begins with a chapter comparing three technologies that could be used to transfer solar Electricity from MENA to the Northern states. Those options are hydrogen, the conventional alternating current (AC) grid and a high voltage direct current (HVDC) infrastructure.

Hydrogen quickly drops out in such an application as two conversion steps, long transport and storage lead to an efficiency of the whole process below 30%. Also the conventional AC grid has not a sufficient efficiency. For 3000 km, only about 55% energy efficiency can be reached.

A HVDC line is significantly better with about 90% efficiency over 3000 km. That is why the study proposes to construct 20 transmission lines all over Europe until 2050, each with a transfer capacity of 5 GW. Such an infrastructure could then deliver 15 % of the projected electricity demand of Europe. Figure 1 summarises this scenario for 30 European countries from Scandinavia to South-Eastern Europe. 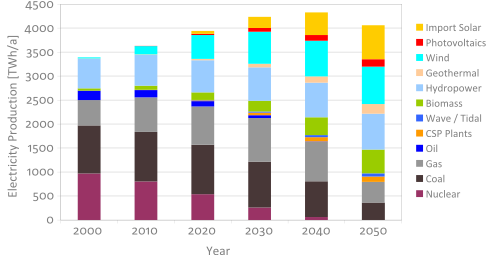 Image 1: TRANS-CSP scenario of gross electricity production and import for the analysed European countries until 2050. The import of other than solar electricity to the region is negligible. Diagram reproduced from the TRANS-CSP summary

Concerning replacement of base load: the study projects that renewable energies will primarily reduce fuel consumption until 2020, but hardly substitute power capacities. Another interesting fact concerns the dependency from energy imports, an argument that is often brought against the DESERTEC project. Figure 2 outlines the amount of energy imported from foreign countries to the EU. 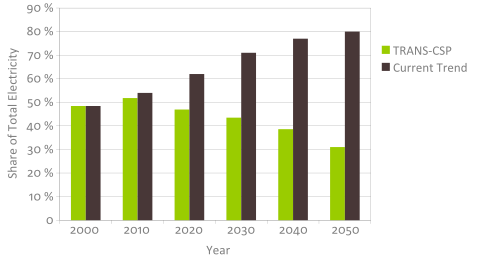 By strengthening renewable energies within the European Union, import dependency can be dramatically reduced. The solar import of 15% of our electricity from MENA countries then are peanuts compared to the energy that today is imported in form of coal, oil, gas and uranium.

If the scenario becomes reality, Europe would have a share of 80% renewable energies for electricity production in 2050. This requires a efficient backup structure to compensate fluctuating feed-ins from renewable energies in form of natural gas peaking plants. The local electricity grid will have to be consolidated to redistribute electricity from the centres of production (offshore wind, rural biomass) to locations of demand (cities).

One argument against the further financial support of renewable energies with premium feed-in tariffs as realised in Germany is that this money could be spend wiser to improve the efficiency of traditional (i.e. fossil and nuclear) technologies. This arguments forgets that those technologies itself are heavily subsidised already. These subsidies are direct or indirect and include:

and last, but especially not least:

External costs were and are a current research topic. In Europe, the ExternE project group investigates external costs caused from energy production. They have a short definition of external costs:

An external cost […] arises when the social or economic activities of one group of persons have an impact on another group and when that impact is not fully accounted, or compensated for, by the first group. Thus, a power station that generates emissions of SO2, causing damage to building materials or human health, imposes an external cost.

When those costs are assessed, they can be re-internalised. Ways to do this are either taxes on technologies that cause the costs or by financially supporting alternative technologies which avoid those costs. External costs which have not yet been fully assessed are nuclear costs caused by nuclear waste disposal and transport. Other unquantified costs are political costs for wars on finite resources or military presence in general to secure access to them.

So support for renewable energies is not only fair but rather necessary to neutralise an otherwise unbalanced situation.

In the next and final DESERTEC studies article I will cover AQUA-CSP, a study estimating the potential for providing water by desalination of sea water, powered by abundant energy from CSP plants in desert countries in Northern Africa.