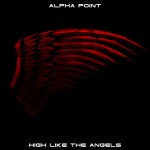 Alpha point is a music project originating from a Russian electro band. Their style has influences of Depeche Mode, combined with dance floor compatible beats and straight industrial guitar riffs. The result is not a complex composition, but honest, enjoyable techno songs. They have have released several singles and albums on the internet archive. Here, I review their latest single release High Like The Angels which features four different versions of this songs plus the bonus single God’s Anger. Listen to my favourite picks and download the album, if you like it.

High Like The Angels (Relaxed Mix) is my favourite version of this song, probably because it sounds more like Trance, lacking the e-guitars. It such sounds a little bit like an early song from Darude or Paul Oakenfold.

Rank two goes to the Cuttin Wings Mix by Personal Space. It uses e-guitars, but adds much cinematic atmosphere by adding depth (i.e. echo) and a subtle soundscape. The song would well fit dystopian science fiction film which plays in an abandoned metropole.

The other song on this release, God’s Anger sounds very similar in instrumentation and structure. Nothing surprising here, but a very solid (read: high quality) production makes also this song very pleasing to listen to, when you are after energetic trance-industrial-music.