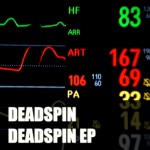 Free online music is still often linked to eclectic, weird and experimental music. This rock album from 2006, recorded by the band Deadspin is a good counter-example of artists who offer their first release for free. In September 2009, their second album Little Birds Are Like Bullets was published at Split Infinity. In between, several live acts were added to the Internet Archive. As I only review free music here, I stick to Deadspin EP. But have a listen to their new album on the band’s homepage,too! I would compare their sound to a mixture of Coldplay and Sting, but only to give you a rough estimate on how they sound without hearing them, what you can do in the following: END_OF_DOCUMENT_TOKEN_TO_BE_REPLACED