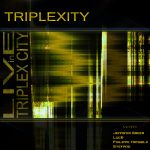 I am usually sceptical of loungy world music attempts for being shallow, flat listen-and-forget experiences. This album defeated that suspicion thoroughly: not only do all tracks have more than enough depth, they all seem to have their own inspiration.

Afro Blue is over 8 minutes of slightly eclectic instrumental jazz, lead by an interesting flute voice.

Afro Red (feat. Philippe Mangold) is a strange (read: good) blend of world music, infused with the style of Secret of Mana’s soundtrack.