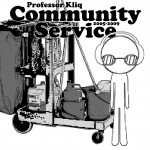 Juicy techno with attitude. Triggered by the recent release of his new Teragraph EP, I looked back to my archive and found ten years of and twelve releases by Professor Kliq. Time for another review of one of his classics, one of the releases that made me a fan. It contains his smashing hit Plastic & Flashing Lights, which is such an ear-charming, head-nod-inducing, cannot-sit-still-evoking track. It appeared on many compilation and best-ofs in the following years:

Plastic & Flashing Lights is such an ear-charming, head-nod-inducing, … wait, that sounds familiar?

Surfs Up (Eat Shit) is upbeat big beat and reminds me of the soundtracks of the first two episodes of the Need for Speed racing game series.