Soundtrack for a hard-to-get movie. Melancholic atmosphere, with a hint of suspense. 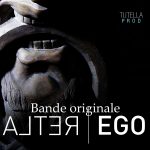 Xcyril is Cyril Humbert, a professional composer, who has published 11 of his albums, under a Creative Commons license to Jamendo. He specialises in soundtracks for films and video games. This soundtrack in particular has a dark atmosphere, most fitting to accompany a rainy autumn evening.

L’Attaque de l’école starts slow with a minute-long choral intro, but then moves into orchestral film score territory. One more minute of building tension through percussive elements, leading to a solid finale, which reminds me a bit of the old Warcraft 2 soundtrack.

La Fin de Monbourg is your typical orchestra plus drum kit track for a suspense moment in the film.

Le Mort de Chloé finally is a one minute one shot that brings everything to the table: dark start, electronic effects, subtle strings, drums and horns. Trailer material!