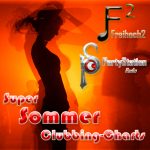 frei² by Robert Bienert is a program featured in Freies Radio Kassel, an independent radio station in Germany’s wild centre. For several years, this program has been sending out a steady stream of Creative Commons music. This release consists of individual tracks, on air for a clubbing night over 10 years ago. Enjoy!

Magic In Your Eyes‘s intro sounds a bit rough, but after the first 72 seconds, the track really takes off.