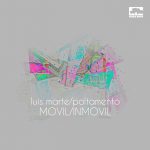 This is more on the artsy side of the spectrum I am reviewing here, but some broccoli from time to time is good for the taste buds, or so I heard… but sketchy metaphors aside: this release won’t make you dance, but instead tickle your musical senses where they are rarely touched by radio music.

movilinmovil 2 sounds great on headphones. The recording does not hide the sound of the piano. You hear the artist moving, the instrument reacting to pressure. Meanwhile, a purely synthetic ambience of glitches, wavy synth sounds hovers over this apparently analogue recording. It’s not “dance-ready” music, but there is intense rhythm going on between piano and clicks and bleeps.

movilinmovil 5 sounds as if the piano had been placed near an approaching storm, or on deck of a sailing cruise ship. It reminds me of that ridiculously popular recordings of pianists playing at airports and train stations.