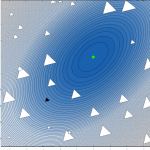 For my diploma thesis I needed an easy-to-use optimisation algorithm which could minimise a given function. I had access to Matlab, but surprisingly, none of the supplied optimisation functions seemed to satisfy my needs: I wanted to globally minimise a non-linear function within boundaries without using gradients.

So I did a little research and found a Globalized Nelder-Mead method (PDF), which is a tuned version of the good old downhill simplex algorithm. Then I implemented it as a Matlab function. By the way: the function also works fine with Octave.

What does it do?

The Nelder-Mead algorithm, sometimes also called downhill simplex method, was originally published in 1965. It is an iterative algorithm for local, unconstrained minimisation of a non-linear function

. In contrast to most other iterative algorithms, it does not rely on the derivative of the target function but only evaluates the function itself. This makes it extremely well suited for cases when the target function is not an algebraic term, but a simulation model which cannot be derived directly. It also does not approximate the function’s gradient but is based on geometrical projections of an n+1-point polygon—the simplex—in the n-dimensional parameter space of the target function. A simplex in two dimensions is a triangle, one in three dimensions is a tetrahedron. In general, the simplex can be represented as a matrix

is replaced by a better one with a smaller function value and to repeat this operation iteratively until a local optimum has been found. To achieve this, three different transformations are applied to the simplex which let it move in directions of descent and shrink around a local minimum. These transformations are called reflection, expansion and contraction.

In each iteration, first the worst point is reflected at the centroid of the remaining points. Depending on the quality (good or bad) it then replaces the worst point in the simplex. If the reflected point is not better, it is withdrawn and the other fallback operations are executed.

The globalized Nelder-Mead method just generalizes this idea to find a global minimum. Instead of initialising the simplex once, multiple simplices are initialised and each one finds one local minimum. There are some tweaks to make the location of these simplices better than random, but principally they are spread randomly within the allowed boundaries.

Just copy the file gbnm.m from the download below into a directory where Matlab or Octave can find it. Then just call the function gbnm. A typical usage might look like this:

The function does not only return the found minimum and has an optional argument for tweaking the algorithm parameters:

Refer to the output of help gbnm and the research paper for further detail. If something remains unclear or you have found a bug, feel free to comment or post an issue on GitHub!

The source has been moved to GitHub: repository ojdo/gbnm contains the function file, and a proper README file.