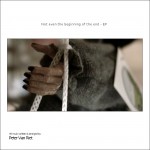 Peter van Riet is an incredibly talented musician from Belgium. Fortunately, he built on that talent and studied Classical piano, followed by supplement courses in harmonics and composition. The results of this effort are partially for download on his homepage. He first names Craig Armstrong in his list of artists that influenced him. And that is hearable in his only major release I found so far. It is a piano-dominated masterpiece between cinematic soundtrack and “modern classical” compositions. It is difficult to select only three tracks in the following as a listening example, because the whole album is too good to be free. But don’t believe me unheard! Get dazzled!

It is uploaded unfortunately as a ZIP archive which does not allow streaming of individual tracks. Additionally, it is released under a restrictive license, which does not allow me to re-upload it properly. So I just can recommend you to download it and then just to listen to track 10 and following. I promise, you will not regret it!