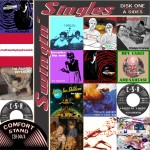 The Comfort Stand netlabel is one of the strangest out there. It doesn’t focus on experimental sound in the sense of noise, bleep and clicking sounds, but in terms of a colourful mixture of artists, genres and styles. One song is a typical pop song, the next one would fit a ghost ride or seems to be written by someone on drugs. This release is a double album presenting the whole range of strangeness you can find in other releases by this label.

Polivox Box + Garage has the distinct Comfort Stand Records sound = 60’s influenced, disco and absolutely strange. The song would fit a film with both Adams family and Scooby Doo, facing each other in a discotheque led by Austin Powers.

Hotcakes and sausage is finally a hilarious fun song which could be sung be the cookie monster from Sesame Street. Listen and laugh! 🙂