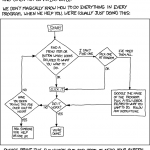 I usually don’t post plain links to stuff I found on the internet. But this is an exception. This web comic on the right is just so true. The author of this (and 626 other) comic strip(s) is Randall Munroe. On his homepage xkcd he publishes new comics three times a week.

Other episodes I find worth to be mentioned are: Geohashing because of its originality and the idea of creating this “random adventure generator”. Height, a logarithmic overview from the border of the observable universe down to us. Random number: simplistic and funny. Other motives are quite romantic with a mathematical flavour, like in Useless. A final hint: read the tooltips which appear when you place the mouse over the comic image. The tooltip for the comic I included here says:

‘Hey Megan, it’s your father. How do I print out a flowchart?’