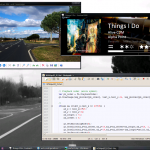 Deskmodding is the art or the act of customizing the appearance of the graphical user interface. Usually this is done on the level of the operating system, but there are also single applications that allow to modify their appearance by so-called skins. For the operating system Windows it is not possible to easily change the default appearance as the selection of themes that can be selected is limited to a handful of designs like the classic Windows interface, Luna for Windows XP and Aero since Vista. Windows Media Center Edition brought a revamped version of Luna which became very popular.

But apart from those designs, Windows does not permit to select user-made themes. This is due to a check in the file uxtheme.dll in the system32 folder. There are dozens of downloads of patches that promise to replace the file with a patched version that permits so select whatever style one prefers. But it is easy to download the wrong patch or even get a virus on one’s computer this way. But there is an alternative: UxStyle. 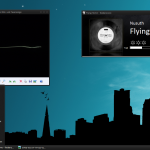 UxStyle is an application that installs a small service under Windows that deactivates blocking of custom made themes on-the-fly. No changing of uxtheme.dll is necessary. Final information: A great repository for themes is the section Visual Styles on deviantART. Downloaded themes have to be placed in the folder Resources\Themes in the Windows installation folder.