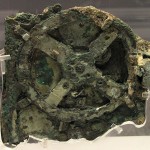 The Antikythera Mechanism is an old artefact, dated back to about 100 BC. It was originally rediscovered 1902 on board an ancient Greek ship wreck. Its purpose probably was the calculation of planets’ positions. It is far more complex than any object found before from that period.

Beginning with 1951, Derek de Solla Price was the first who systematically investigated the mechanism after its discovery. He subsequently published several articles in which he called it “An Ancient Greek Computer” for calculating the motion of stars and planets. By that time his results caused irritation among historians. The findings implied that the Greeks had technical knowledge that was believed not to be known before the 13th century. Further research was done in the 1970’s using X-rays and 2005-2006 with a computer tomograph which made it possible for the first time to look at the mechanism’s inside. Corrosion had made it impossible to decompose it before without destroying the parts.

Both investigations basically backed up Solla’s initial assumption. It is probably a portable device dedicated to calculating the planets’ movements using 37 gears in total. It also could be used to predict solar eclipses. An inscription was found on its surface, from which about 2000 characters of astronomic text could be rendered legible and translated. It also features hints on the device’s functionality. 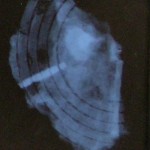 In conclusion, the Greeks were much more technically advanced than thought. The generally agreed image sees them as the nation of philosophers and mathematicians. But also in technical engineering they seem to have had a leading role in that period. Thanks to history, this technical knowledge got lost in time and had to be rediscovered – more than 1000 years later.